Reserve your next class from there

Classes, workshops, gift certificates. Note: If you buy a workshop, you'll need to enroll yourself afterwards via https://www.gratefulyoga.com/events/workshops.

Jane Benson focused on her breath and arched back onto a large blue exercise ball. The 42-year-old stared at the ceiling of her delivery room in Evanston Hospital and braced herself for the next contraction.

“The shallow breathing through the pain comes naturally,” she later explained. “It's remembering to take the recovery breaths that gives you the power to keep going.”

Benson recalled deep breathing techniques she learned over the past nine months from her yoga instructor Lela.

Although an IV cord limited her range of motion, Benson continued with various standing and sitting yoga stretches over the course of 12 hours with the help of the ball and husband Tom. Finally, after a last-minute epidural and a solid hour of pushing, Ella Joy Nightingale took her first breath at 9:40 p.m. Tuesday, Oct. 2.

Benson is part of a growing group of women today who participate in the niche of yoga classes tailored to expecting moms. The yoga industry as a whole has experienced rapid growth recently, from 4.3 million participants in 2001 to an estimated 20.4 million today, based on a 2012 study by Yoga Journal.  This increase is greatly attributed to the growing trend of special classes like prenatal yoga, according to an industry report from IBISWorld.

An avid runner, Benson turned to prenatal yoga after she became pregnant with her first child last January.

“I stopped running cold turkey just because I didn’t want to do anything to hurt the baby,” she said.

Benson said her OBGYN stressed the importance of staying in shape over the duration of pregnancy and supported her decision to begin classes at Grateful Yoga in Evanston, IL as a low-impact way to stay active. Benson also said the staff at Evanston Hospital accommodated her wishes to bring a yoga mat and ball when it came time to head to the delivery room.

The encouragement of prenatal yoga is a recent phenomenon, according to Rasha Hashad of Mission OBGYN Medical Group in Mission Viejo, CA.

“I think that doctors limited their patients in the past worrying that elevated heart rates could lead to decreased blood flow to the baby, or that certain positions were harmful to the baby,” she said.

Hashad said the mentality that women should cease working out during pregnancy has changed dramatically over the past ten years because of new studies that suggest exercise benefits pregnant women when practiced correctly.

“Today it’s about modification rather than eliminating exercise all together,” she said.

Hashad also believes a shift away from Cesarean sections, or C-sections, is correlated with the booming industry of prenatal yoga.

“We go through trends in OBGYN,” she said. “Now people prefer to use less medicine and be more physically fit to do a natural labor.”

Yoli Yeh, an instructor at Grateful Yoga and registered doula, or childbirth assistant, used yoga training to facilitate the vaginal delivery of her son Rhodes 10 months ago.

“C-sections are expensive as hell, and so much more is needed after for recovery,” she said.  “I did my birth purely with yoga.”

Yeh kept moving after her water broke with yoga class, shopping and exploring the Wicker Park neighborhood of Chicago.  She said the medical industry now acknowledges the importance of prenatal yoga in facilitating fitness throughout pregnancy as well as natural labors.

“There’s a lot of cross pollination going on,” she said. “Yoga teachers and therapists are being invited into doctor’s circles to talk about their craft and bridge those gaps.”

Jill Stein is one of those liaisons.  She works at Northwestern Memorial Hospital as a coordinator and instructor for prenatal yoga classes.

“Yoga is more accepted in our culture now as a practice,” she said.  “It’s not such a novelty anymore.”

Stein said a push from doctors helps explain the growing popularity of her prenatal yoga program.

“We definitely get many physicians referring pregnant women specifically to my classes,” she said.  “I think they are encouraging it more because it helps women breathe better, feel better and be stronger for labor.”

For some, prenatal yoga provides more than just exercise and preparation for delivery. Benson said the mental centering she practiced on the yoga ball in the delivery room at Evanston Hospital helped her immensely.

"It's a nice thing to do during labor and delivery," she said.  "You know, to focus on the things that are important.”

What is my pathway to health?

How do I make the most of this precious life?

You may have heard that yoga will help you feel better
in your body. This is true! But it's also just the beginning.

Simple, enjoyable movement brings your body into balance.
Pain and tension begin to dissipate.
You feel more alive and awake, prepared to
act with confidence and clarity.

It's common to feel too busy or out of shape to join a class -
yet this is precisely why it's beneficial to come!

Yoga is a priceless investment in your long-term happiness.
You leave each class feeling more at ease in your body,
less bothered by stress, and more present to joy.

Here you will be welcomed into a community that
accepts you and supports your desire to grow.
Our highly-trained teachers will safely challenge and inspire you.

This humble studio can be your urban sanctuary -
the place you come to remember who you are
and who you want to become.

Visit the archive for past issues. 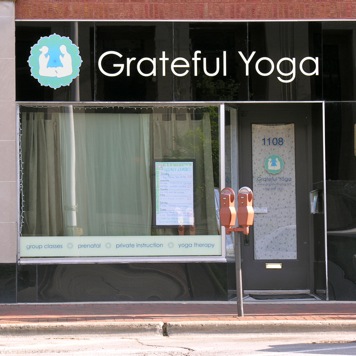